Circular Economics and the $57B E-Waste Opportunity

The plastic waste problem gets plenty of attention, and for good reason: If we continue mismanaging this material as usual, there could be 7.7 gigatons of the stuff cluttering landfills, waterways and oceans, or being incinerated by 2040.

Just as stunning: Plastic isn’t the fastest growing waste stream the world needs to deal with.

According to research released over the past 18 months by the International Telecommunications Union, that honor actually goes to various forms of electronics — ranging from mobile phones to appliances such as vacuum cleaners (the biggest part of the e-waste stream today) to refrigerators, air conditioners and other heat-exchange systems (the fastest growing part of the e-waste universe). That trend is the motivation for a “significant strategic investment” last month — the amount isn’t being disclosed — by investment firm Closed Loop Partners in ERI, the largest IT recycling and refurbishment company in the United States.

More details in a moment. First, consider the problem. “Each year, approximately 50 million tons of electronic and electrical waste (e-waste) are produced, equivalent in weight to all commercial aircraft ever built; only 20 percent is formally recycled,” write the authors of a report published by the World Economic Forum in 2019. “If nothing is done, the amount of waste will more than double by 2050, to 120 million tons annually.”

Two other data points to mull, courtesy of the Global E-waste Monitor: Researchers figure just 17.4 percent of electronics are collected, refurbished or recycled worldwide. (For comparison, the U.S. Environmental Protection Agency reported that the recycling rate for PET bottles and jars was close to 30 percent in 2019.) The value of this e-waste — including the materials that could be harvested and put to another use or the revenue that could be generated by finding them another home — is estimated at $57 billion, more than the GDP of some countries.

These realizations — along with revelations about the fragility of the electronics supply chain exposed during the COVID-19 pandemic and worries over future shortages of material such as glass, copper, gold and aluminum — are motivating a flurry of activity this year related to the circular economy for electronics.

Some key moments. In March, a group of organizations — including representatives of manufacturers and technology service providers such as Accenture, Cisco, Dell Technologies, Google and Microsoft — came together to create the Circular Electronics Partnership, focused on co-defining solutions for applying circular business practices to electronic devices, including the terminology used to describe them and trace them. The alliance has six founding members: GeSi; Global Electronics Council; Platform for Accelerating the Circular Economy; Responsible Business Alliance; World Business Council for Sustainable Development (WBCSD); and World Economic Forum (WEF). Several months later, France’s Back Market, the world’s largest recommerce marketplace for refurbished electronics with more than 5 million customers, raised $335 million to expand its services. The new funding makes Back Market a triple unicorn, valued at $3.2 billion.

The new partnership disclosed recently by ERI and Closed Loop Partners is focused on building its capacity for the collection and processing of electronics. Last year, ERI handled 118 million pounds across 1.75 million square feet of recycling and asset management space in eight states, and it’s on track to process 130 million pounds this year, according to John Shegerian, co-founder and executive chairman of ERI.

Some of those devices are mined for a range of materials, including glass, plastic, cobalt, nickel, aluminum, copper, gold, silver, lead and palladium. Others are refurbished for resale. Some of ERI’s prominent customers include Best Buy, Target and Amazon (it handles collection activities for the retailers, among other things), along with “any OEM you can think of,” as well as New York City, Los Angeles and 500 other U.S. cities.

As part of the investment, Closed Loop founder and CEO Ron Gonen will become part of the ERI board, alongside executives from other investors including LS-Nikko Copper, one of the world’s largest copper smelters; and aluminum company Alcoa. JB Straubel, a Tesla co-founder who fronts cutting-edge battery company Redwood Materials, which took a strategic stake in ERI in March, is also a director.

Shegerian said the new partnership with Closed Loop Partners will help his organization forge new relationships important for scaling the types of materials it can process and sell back into the electronics ecosystem at a time when interest in circular approaches is intensifying. “We absolutely are seeing a sea change from the next generation below me of saying, ‘Enough.’ Enough of the talk, it’s time for us to all get on board,” Shegerian told me.

ERI actually already has relationships with at least two of the roughly 50 organizations that have been funded by Closed Loop’s Leadership Fund: AMP Robotics, which is combining artificial intelligence and robots to automate processing, and Retrievr, the clothing and electronics collection service being developed by the former CEO of Homeboy Recycling, Kabira Stokes.

“There are synergies across the network,” said Martin Aares, managing director of Closed Loop’s private equity platform. What’s more, the firm will focus on helping ERI grow its asset management services for its corporate partners, which include the likes of Microsoft, Nestle and Unilever. “There is a huge market in being able to divert these materials from landfills, and in being able to extend the asset life of products or the individual components within,” Aares said.

James Pennington, manager of the circular economy initiative at WEF, said the economic imperative behind developing more sophisticated practices for recovering materials from electronics is strong. Many metals and other substances critical for accelerating the transition to clean energy, for example, can be recovered from these systems, including nickel, cobalt, lithium and rare earth metals.

Pennington points to research from the International Energy Agency suggesting that demand for these materials will explode: Within the next two decades, for example, the energy sector will account for almost 90 percent of the demand for lithium and up to 70 percent for nickel and cobalt. With fewer than 1 percent of these materials recovered today, “we need a huge increase” in recycling, he said.

As Back Market’s recent funding illustrates, interest in refurbished goods is growing. Right now, this represents about 35 percent of ERI’s business and growing, according to Shegerian. A growing number of manufacturers, especially those selling products business to business, are creating sales models that rethink the ownership of capital equipment, such as medical diagnostics systems or digital printers. These rental or pay-per-use relationships allow the customer to use a device for a certain period of time; at the end of the period, the manufacturer is responsible for collecting and processing the equipment for its next best use.

“The most efficient way to use materials is to keep them in that same use for a long time, to keep the things we have in place longer,” Pennington noted.

Carolien Van Brunschot, manager of circular economy for WBCSD, said as the e-waste issue becomes a more central concern for companies and communities, businesses should pay particular attention to understanding where electronics devices and other digital equipment will land after an organization has outgrown them. “Where possible, you should enter into agreements with your provider or supplier for take back,” she suggested.

To move toward a more circular economy for electronics, she said the industry needs to coalesce around unified terminology that describes the various options and processes available — so that both manufacturers and buyers have a clearer understanding of expectations. “A circular economy is not driven by individual companies,” she said.

That goes for how refurbished items are described. “The aim is to really make sure we treat materials at the highest level of value they can be treated at … What you need for that is transparency about where things have been in the past,” Van Brunschot said.

Article by Heather Clancy, vice president and editorial director at GreenBiz. Heather is an award-winning business journalist specializing in chronicling the role of technology in enabling corporate climate action and transitioning to a clean and regenerative economy. She started her journalism career on the business desk of United Press International, and her articles have appeared in Entrepreneur, Fortune, The International Herald Tribune and The New York Times.

Clancy was the launch editor for the Fortune Data Sheet, the magazine’s newsletter dedicated to the business of technology. She co-authored the Amazon best-seller for entrepreneurs, “Niche Down, How to Become Legendary By Being Different.”  Twitter @GreenTechLady 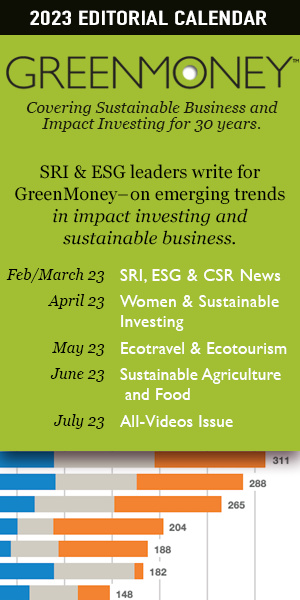 Engage with industry thought leaders on why and how ongoing shareholder engagement and activism play a vital role in affecting share value. Discover how activist investors cultivate relationships with companies to positively influence sustained value creation. Apply the latest campaign practices of activists, how they unfold, their outcomes, and how boards and executives work constructively toward improved stock performance

Engage with industry thought leaders, subject matter experts and issuers on how to best manage institutional investor campaigns for constructive outcomes. Discover how U.S.-based activist campaigns affect the nature of engagements in the U.K. and Europe

JW Marriott Camelback, Scottsdale, AZ The premier annual event for sustainable business leaders. Today's sustainability professional is under pressure to do more, and do it faster, than ever before. Join

The premier annual event for sustainable business leaders. Today’s sustainability professional is under pressure to do more, and do it faster, than ever before. Join more than 1,600 sustainable business leaders to harness the knowledge of experts, peers and new voices to help you achieve net zero, advance the circular economy, elevate social justice, safeguard biodiversity, build resilient supply chains and more. Amid challenging times, the sustainability profession is evolving — with new concerns, opportunities and concepts emerging faster than ever. Join the dynamic GreenBiz community to explore the latest trends, learn from your peers and form valuable connections