Driving Capital from a Foundation of Indigenous Values

By The Staff, First Peoples Worldwide

Investors in the SRI community have been considering promising practices for driving capital into Indigenous communities through a responsible lens for over three decades. In this time, SRI investors, tribes, and Indigenous Peoples globally have forged considerable connectivity. Some of the most prominent examples are the collaborative efforts vis a vis corporate engagement to push investors to eliminate racist images and to halt cultural appropriation, and to cultivate corporate and investor support for the rights of Indigenous Peoples.

A remarkable number of tools have been created to assist SRI and impact investors to act upon their ethos to drive positive social, environmental, and financial returns. These tools range from positive and negative screens, ratings metrics, and environmental, social, and governance (ESG) indices, to industry associations that pool ideas and experiences. Many of these tools are helpful, alongside traditional investment information, for investors to deliver capital into Indigenous initiatives.

At First Peoples Worldwide (First Peoples), we continue to hone these tools–and to create new tools–that focus directly on the risks of development on Indigenous territories and the potential rewards of meaningful partnership with Indigenous Peoples.

One of the consistent challenges, especially in relation to investing in Indigenous communities, is measuring the “S” in ESG for the dual purposes of understanding the full extent of social impacts as to development, but also to advocate for an inclusive process that elevates Indigenous perspective and values as to social and cultural impacts.

Qualitatively, the definition of social risks has broadened over time. The 2014 Report Costs of Company-Community Conflict in the Extractive Sector, links social costs to the negative social impacts of a project that develop into social conflict in opposition to an extractive industry project. The social conflict then escalates and companies must exert resources to manage the conflict. Managing social risks in this context includes assessing changes that may occur as a result of the project to local demographics, social infrastructure, the local economy, and environmental changes such as pollution or access to resources. The report also considers managing the process of change through consultation, communication, participation and consent of the local community. In recent years, the qualitative discussion around social impacts has grown to encompass a fuller consideration of human rights. Several tools have been distilled from international standards such as the Universal Declaration on Human Rights and, in this case, the United Nations Declaration on the Rights of Indigenous Peoples (Declaration).

An aspect of the Dakota Access Pipeline (DAPL) controversy that made it different from the similar conflicts in Indigenous communities around the world, was that it took place largely in the public eye and within public governmental processes. First Peoples took this opportunity to gather the available data and publish a case study that developed and tested metrics to quantitatively measure the financial losses associated with social conflict. In short, the case study, Social Cost and Material Loss: The Dakota Access Pipeline, is one of the first academic studies to undertake measurement of the “S” in ESG. 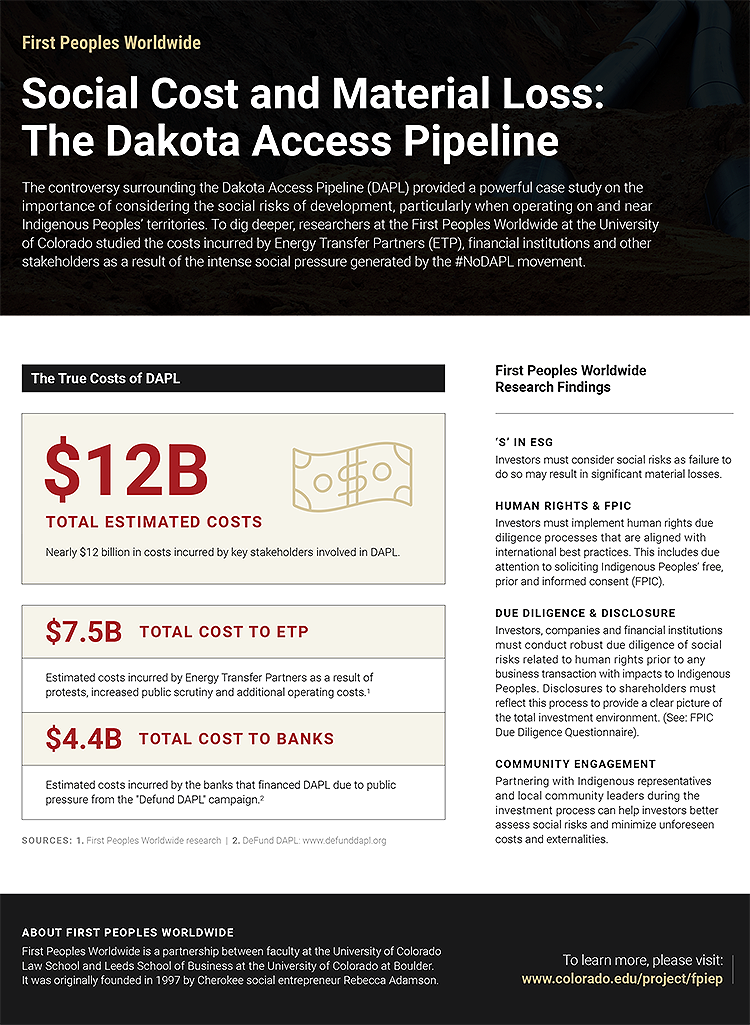 First Peoples found that Energy Transfer Partners’ (ETP), DAPL’s parent company, stock price significantly underperformed relative to market expectations during the study period, and it experienced a long-term decline that persisted after the project was completed. In fact, from August 2016 to September 2018, ETP’s stock declined in value by almost 20 percent whereas the S&P 500 increased in value by nearly 35 percent, a differential of 55 percent. The case study did not assert that this underperformance was exclusively attributable to social pressure however, given the magnitude of media attention generated by the controversy as well as the magnitude of financial losses, social pressure was a likely contributor.

ETP initially estimated the cost of the pipeline at $3.8 billion, however First Peoples estimated that the final cost of the pipeline was upwards of $12 billion. This total includes the $7.5 billion incurred by ETP, and the $4.4 billion in costs incurred by the banks that financed DAPL. Further, at least $38 million was incurred by taxpayers and other local stakeholders. Thus, the findings of the case study show that social costs lead to real material losses.

The financial losses strongly correlated with the social conflict are largely consequences of failing to account for the social risks of development, including a failure to respect human rights. The failure stemmed, in part, from a lack of adequate due diligence at the outset of the project. While the bare minimum standards of due diligence within the domestic legal and regulatory regime were completed, the scope of the process was far too narrow to assess the true nature of the opposition as to the social, environmental, and cultural impacts of the pipeline on and near the Standing Rock Sioux Tribe’s territories.

Because we found that the lack of due diligence had a direct correlation to the material losses experienced by investors and others, First Peoples published an FPIC Due Diligence Questionnaire for outside entities seeking a better assessment that integrates respect for the rights of Indigenous Peoples. The questionnaire provides a series of questions that lead the reader through a rights-based set of considerations specific to working with Indigenous leaders and in Indigenous territories. The purpose of the questionnaire is to expand a routine social risk assessment in a way that provides a comprehensive picture of the potential and actual social impacts attendant to the particular project. 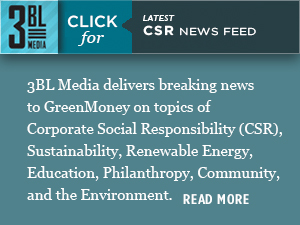 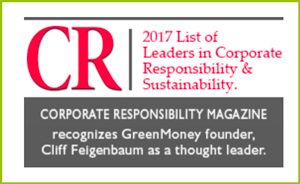 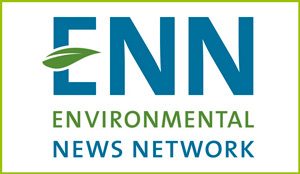 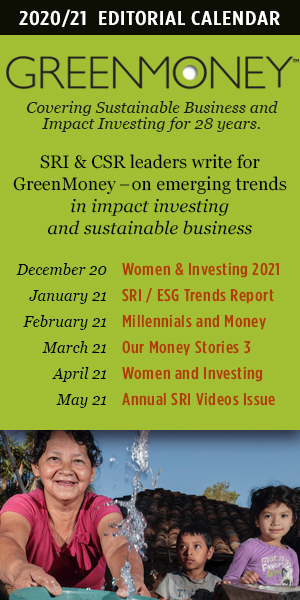 Neighborhood Economics: Healing all of our Communities

17novAll Day18Neighborhood Economics: Healing all of our Communities

A new economy of interdependence is emerging all around us. That’s why Faith+Finance is convening online, exactly 2 weeks after the election because “whatever the outcome, we must all choose

A new economy of interdependence is emerging all around us. That’s why Faith+Finance is convening online, exactly 2 weeks after the election because “whatever the outcome, we must all choose to come together in hope.” The online gathering will center on four pillars: Creating a Culture of Change, Catalyzing Creative Funding, Reimagining Real Estate, and Accelerating Entrepreneurship. Come share your story and passions with people who believe a different world is possible – impact entrepreneurs and faith congregations, social investors and a spectrum of community leaders, artists and philanthropists.